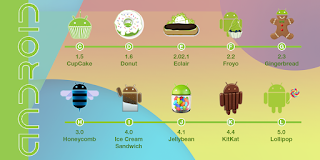 What is Android
Operating Systems have developed a lot in last 15 years. Starting from black and white phones to recent smart phones or mini computers, mobile OS has come far away. Especially for smart phones, Mobile OS has greatly evolved from Palm OS in 1996 to Windows pocket PC in 2000 then to Blackberry OS and Android.

One of the most widely used mobile OS these days is ANDROID. Android is a software bunch comprising not only operating system but also middleware and key applications. Android Inc was founded in Palo Alto of California, U.S. by Andy Rubin, Rich miner, Nick sears and Chris White in 2003. Later Android Inc. was acquired by Google in 2005. After original release there have been number of updates in the original version of Android.


Features & Specifications
Android is a powerful Operating System supporting a large number of applications in Smart Phones. These applications make life more comfortable and advanced for the users. Hardwares that support Android are mainly based on ARM architecture platform. Some of the current features and specifications of android are:


Android comes with an Android market which is an online software store. It was developed by Google. It allows Android users to select, and download applications developed by third party developers and use them. There are around 2.0 lack+ games, application and widgets available on the market for users.

Android applications are written in java programming language. Android is available as open source for developers to develop applications which can be further used for selling in android market. There are around 200000 applications developed for android with over 3 billion+ downloads. Android relies on Linux version 2.6 for core system services such as security, memory management, process management, network stack, and driver model. For software development, Android provides Android SDK (Software development kit). Read more about open source software.

Google, for software development and application development, had launched two competitions ADC1 and ADC2 for the most innovative applications for Android. It offered prizes of USD 10 million combined in ADC1 and 2. ADC1 was launched in January 2008 and ADC 2 was launched in May 2009. These competitions helped Google a lot in making Android better, more user friendly, advanced and interactive.
Android :"Introduction"