Manchester United comes to India for greeting their Fans 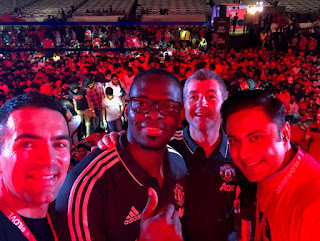 ILOVEUNITED, a unified fan-focussed event for Indian fans, was successfully held in Mumbai today. This is the 2nd time that Mumbai has hosted this event. Manchester United Ambassador Denis Irwin and club legend and former striker, Louis Saha were present at the event. They interacted with the fans during a live screening of the Premier League away fixture against Burnley on Saturday 20th January at The Royal Western India Turf Club, Mahalakshmi, Mumbai.

About Manchester United
Manchester United is one of the most popular and successful sports teams in the world, playing one of the most popular spectator sports on Earth. Through our 139-year heritage we have won 66 trophies, enabling us to develop the world’s leading sports brand and a global community of 659 million followers. Our large, passionate community provides Manchester United with a worldwide platform to generate significant revenue from multiple sources, including sponsorship, merchandising, product licensing, new media & mobile, broadcasting and match day

Manchester United comes to India for greeting their Fans